The Typing of the Dead: Overkill Gets Shakespearean with New DLC. News hardcoregamer.com. TotD: Overkill is the second typing version of a House of the Dead game since 1999's Typing of the Dead. It was developed by a British company called Blitz Games Studios whose bankruptcy during production didn't prevent the game to be finished after acquiring a new.

The writing for Sega's 2009 Wii exclusive, The House of the Dead: Overkill - later released for PS3 - was similar over-the-top broschlock that was above average for a game, but way below par for a Tarantino homage. However, it was very satisfying as a lightgun-esque on-rails shooter, even if it didn't quite hit the same mark as the absurd dialogue of the classic House of the Dead 2: 'G'S BLOODSTAINS?!'

Now developers Modern Dream have given this gawky, spirited shooter the Typing of the Dead treatment: that is to say, they have made a cute typing tutor out of it. As with the original Typing of the Dead on the Dreamcast, words pop up in front of your foes, you type the words, and each correctly entered letter sends a bullet flying into a mutant, zombie, or giant insectoid's brain. Pow! Dead. Now you have learned the phrase 'nostril oil', and so have your fingers. Magic.

The delight of the original Typing of the Dead was twofold. You were retreading steps you'd already taken through the triumph that is the eccentrically translated dialogue, stilted dubbing and batshit plot of House of the Dead 2. The second delectable morsel was that the randomised phrases it was teaching you to type were dramatically absurd. Stuff like 'nice kilt you're wearing' or 'I filled his litterbox with quicksand', and contextually weird words such as 'daffodil' and 'snapdragon' that contrasted with your terrible thirst to murder some decaying man-giblets. The two facets worked well together: nostalgic plot, ridiculous vocabulary. It was just weird enough to be completely great.

The question is whether Overkill and typing work well together in this new adaptation for the PC. Initially, there's real fun to be had in Story Mode. The essential template is as follows:

[Zombies die as per your fingers. Repeat with more Samuel L. Jackson impressions. And much more swearing.]

You can choose from the wearingly-named modes 'Bitch' (easy), 'Agent' (medium), or 'Motherf**ker' (hard) and unlock a hardcore mode further on, but largely it's very forgiving, giving you ample health to make it through most stages. How fast the zombies in front of you will attack is indicated by the colour surrounding the words you're typing: yellow for imminent shambling, flashing red for Your Face Soon To Be Mashed.

Sometimes zombos will lob stuff at you, requiring you to hit a single letter to knock it out of the air. This can be quite annoying if you've already started typing a phrase such as the Father Ted classic 'Down with this sort of thing', but you can also cancel halfway through a phrase if you pay attention to which button that is (I didn't). I did, however, learn how to spell onomatopoeia.

Occasionally, the overlaid dialogue would silence the sound of my gunshots, which made me slightly confused as to whether I was hitting or missing, but this was my only complaint. Some people in the Steam community have reported problems booting the game initially, but it seems a small problem that the developers have reassured me that they are fixing. Otherwise, this is a fairly solidly made, bug-free adaptation.

Each player's experience of the game is unique, as the words that pop up are randomised, and there's a nice little arcade mode of mini-games where you can try out a survival mode with forever-spawning waves of zombies. But there are no discrete 'Drill' or 'Tutorial' modes like in Typing of the Dead, and only nine stages to play through in Story Mode, so it's a short wee thing. The game does however come with the full version of the original House of the Dead: Overkill, so you can play through it with mouse or controller should you so wish.

The truth is that this game has lost a little of the chemistry that Typing Of The Dead possessed. House of the Dead 2 is a classic: the nostalgia it elicits is very difficult to resist. Overkill, while remaining one of the better Wii games and having a polished 70s grindhouse style, is not really in the same league. It's like having a gin and tonic without the lime in it; it'll get you drunk, but you won't feel arch about it.

The novelty of typing the phrases 'male crime sim' and 'flowers to womans', although hilarious in the first few stages, starts to fade a little without that ancient Sega charm. You realise that you're just retreading the slightly toothless plot of a game that you didn't ever feel nostalgic about. The bromancing leads start to get tiresome. And then you need a gin and tonic. 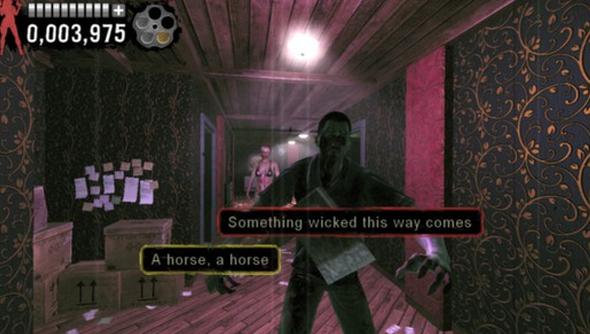 There's another thing nagging at me, and I think it's this: Typing of the Dead was a game best shared with other people. The spectacle of it was a living room thing - it wasn't really about it being a typing tutorial - and in Japan, it lived in arcades. Overkill on Wii was also intended to be social, to be played arcade-style, local multiplayer with other people in the room. Typing of the Dead: Overkill is a solo experience, although Sega has said that it will very soon patch in online co-op. There's no local multiplayer, which would have been fun. Still, I polished up my typing skills, laughed at the silly words, and came out knowing how to spell onomatopoeia.

Last year, I had to take a recruitment test for a temp job in London where they sat me in front of a dusty old machine and opened up a program designed to test my proficiency with Word 95. (Yeah, it was Word 95. It had the disposition of a weary elderly gentleman living in a grey interface.) They ascertained from it that I could click things, and also that I could type a high WPM, though I had spent most of the hour trying to get rid of the paperclip help flibbertigibbet and remember where everything was located. Lord, I wish I'd just been given an energy drink and a short time with this game on hardcore instead. Give it to every temp agency for every disillusioned writer to crack a smile at.

Typing Of The Dead Overkill Multiplayer